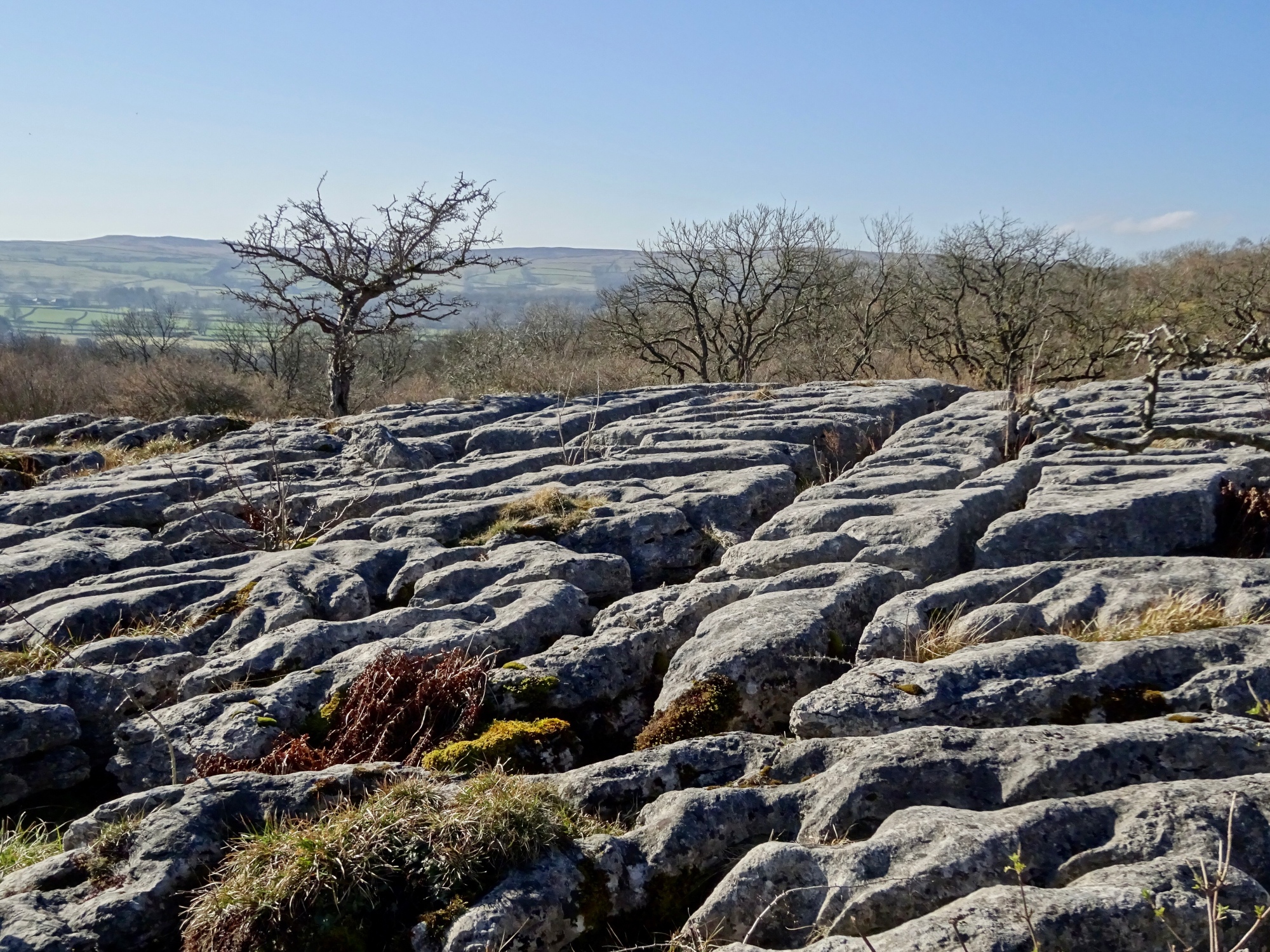 It felt like being on holiday today. Oh. Wait…we are on holiday! To be more precise, it almost felt like a late autumn day in Utah. The sun was out and felt warm, the air was cold – just above freezing , and the hiking was hard… but more of that in a bit.

First of all, I should mention that Andrew has a cold. He felt it coming on at home and did all the appropriate tests. Not Covid. Just a head cold. I say ‘just’, but he was suffering last night and didn’t sleep well. Half way through the night he got up and headed for the sofa, and at least one of us slept well after that. And so this morning I tried my best to not go bouncing around, and to refrain from saying “up and at ‘em!” and “come on, let’s go!“. Instead, I made two pots of coffee, and breakfast, and did the washing up…and only then did I start dropping hints like sledgehammers. The view from breakfast was lovely, mind you, a beautiful sunny morning. The pond in the nearby field (only there because of all the rain) was frozen over and so there was even an ice rink accessible, should one be inclined towards winter sports.

We did eventually get ourselves ready and out the door, heading for a five mile hike. Given the lovely weather, I had decided we should head up to the moors and admire the view. The route started with an immediate failure. We were supposed to take a small passageway up to the next road, but it was closed due to part of a retaining wall being washed out. Not a major problem (for us, that is) as we just walked round the block to get to the other end. We turned up a lane, and I do mean up, and were soon heading out to the hills.

We stopped after only a short way for me to remove my coat, as I was already too warm. The sun was really making a big difference to the ‘feels like’ temperature. The air was only around 5C, but I was quite toasty! After that, we kept plodding. Up hill, through gates, over some very steep stiles and through some extremely narrow gap stiles, so narrow that you had to remove your pack to get through.

The views were rewarding and I kept stopping to take (yet another) photo as we climbed. I was excited to reach our first limestone pavement. Not something we have at home, these areas, complete with random trees growing through them, were just as scenic and intriguing as I’d imagined.

Occasionally, with the stone being so white, it was hard to tell whether I was looking at a field of boulders or a field of sheep. Sometimes one of the boulders would move, so I concluded there were at least some sheep present. We continued up to the top of the hill, with views across the Dale of limestone scars and moorland, before eventually turning into Grass Wood.

The path soon turned muddy, and then it turned very muddy, before becoming extremely muddy. Still, we’re reported to be intrepid explorers! So, we found our way through the adjacent undergrowth, bushwhacking through some prickly hawthorn, and around the worst of it, but when we did have to walk through it, it was very clarty stuff. It stuck to our boots with enthusiasm.

We descended through the Grass Woods nature reserve, which was lovely. The dappled sunshine coming through the trees was warm and the trees offered shelter from the wind that had been quite chilling on the open moor. The woods are being managed to return them to ancient, native species and there were piles of chopped trees along the pathway. At the bottom of the woods we reached Gibbett Hill, a spot where apparently they had hung the body of a thief and murderer, Tom Lee, by manacles, as a deterrent to others.

After a short walk along the road we turned off into Lower Grass Wood, and luckily came across a fallen tree trunk, perfectly suited to being a bench while we ate our snack bars for lunch. After that, we continued along the footpath as it became a riverside walk, giving lovely views of gentle lapping water, glinting in the sunshine. Gentle, that was, until we reached Ghaistrill’s Strid. This rocky narrowing funnelled the water through at high speed, and the previously quiet river became a roaring torrent, just briefly, before calming down again.

As we neared the bridge in Grassington, the field we had to cross was clearly flooded. We tried, and failed, to find a way around, ultimately squelching through mud and water, which was high enough to find its way through the lace holes on my boots.

After that, we detoured along the road to the visitor centre. This time we did find the charge point, and formed a plan to bring the car down later. I bought a couple of pin badges for my national parks collection, and then we headed back to the cottage, stopping only to buy bananas, crisps and some sparkling water (it seems I forgot to pack quite a few things…). I was very grateful to get back. My legs are definitely out of practice at this hiking thing. I was shattered.

After an hour of rest, some crisps, coffee, chocolate muffins and a shower, we felt slightly recovered and drove the car down to the charge point. After a few failed attempts to get it started, we succeeded, and left it to top up whilst we returned to the Black Horse for dinner. Another nice meal, and a relaxing, gentle evening, before collecting the car and coming back to the cottage. Nothing left to do tonight, but blog, rest and hopefully sleep well.